This recipe is so incredibly easy yet such a flavor enhancer for all parmesan-prone dishes – I love it!

I am not vegan but I try to eat increasingly vegan. Although I LOVE real parmesan, I don’t need on a daily basis. 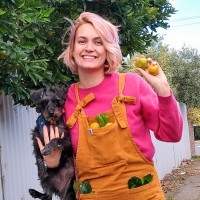 Hi! I'm Pia, a Melbourne-based girl on a sustainable kitchen quest. I hope sharing my recipes, tips and DIYs might help you too! Cheers!